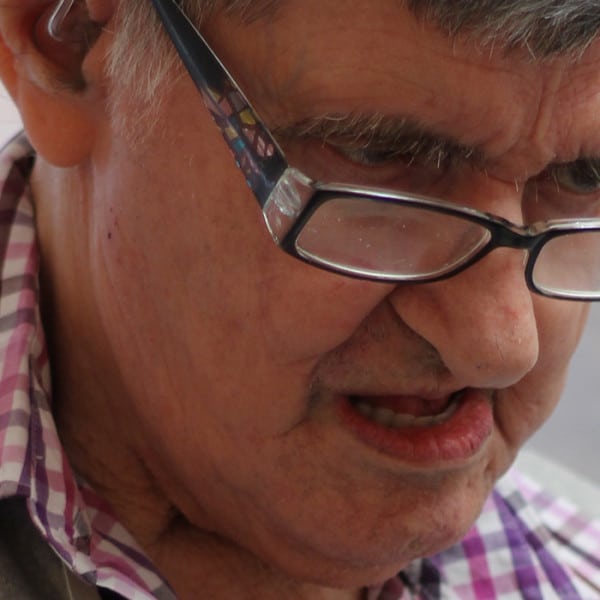 Back to all makers

In 1937, when he was 2 years old, Albert Geere was placed in the Fountain Children’s Hospital in Tooting. Since then he has lived his life in care institutions and more recently independent supported living settings. Albert has made pictures all his life; early on with whatever materials came to hand. Albert began working in the Project Art Works studios in 2009.

When visiting the studio on a weekly basis, Albert was painting with great focus and intensity. Albert was meticulous and worked quietly and steadily for long periods without breaks. At home, Albert has a range of objects that he’s passionate about, most notably, a collection of clocks and watches. These, alongside other favoured items, have at times entered Albert’s work as subject matter but more often he paints from his imagination.

Albert’s interaction in the studio was subtle and unobtrusive. He is very clear about his working methods, enjoying the calm focus of the studio environment, a place where he can be with others whilst progressing his own work uninterrupted. He is a gentle presence to work alongside.

Albert has works in private collections.

If A Picture’s Worth A Thousand Words, Hastings Arts Forum Gallery, 2010

Albert Geere is featured at the following exhibitions

This website uses cookies to improve your experience while you navigate through the website. Out of these, the cookies that are categorized as necessary are stored on your browser as they are essential for the working of basic functionalities of the website. We also use third-party cookies that help us analyze and understand how you use this website. These cookies will be stored in your browser only with your consent. You also have the option to opt-out of these cookies. But opting out of some of these cookies may affect your browsing experience.
Necessary Always Enabled

Any cookies that may not be particularly necessary for the website to function and is used specifically to collect user personal data via analytics, ads, other embedded contents are termed as non-necessary cookies. It is mandatory to procure user consent prior to running these cookies on your website.