Week 3 on the ONCA Barge

There was a natural ease in the third week of our residency, and the confidence to try new things. Andy joined the group for the first time. He set up instruments and recording equipment downstairs, replacing the camera obscura with the possibility of songs and soundscapes.

Paul started the day with a walk around the marina, experimenting with a GoPro to record film and images. In the afternoon, Paul took photographic portraits, before working more closely with Mark downstairs. 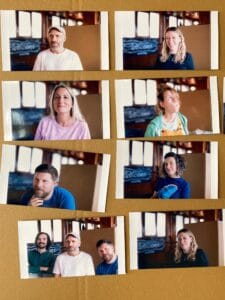 Having worked mainly with paint and colour over the past two weeks, Mark chose to focus on sound today. A keen singer, Mark led some of the other artists in a couple of songs. He also experimented with creating abstract soundscapes using a loop pedal, instruments and voice, which Paul joined in with. 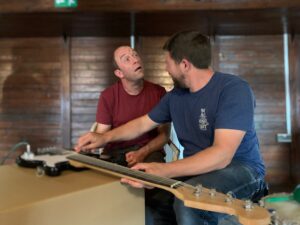 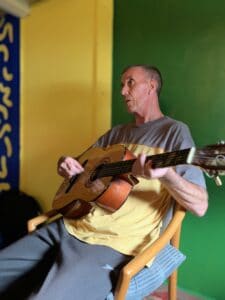 Meanwhile, Aida used stickers, paint and felt tips to layer colour. Throughout the day, she explored a range of materials from paper to wood, focusing on the edges and hidden corners of three-dimensional surfaces. Aida’s characteristic way of applying paint to all every surface of a canvas was translated to a smaller scale as she began a series of painted jigsaw pieces.

Lucy, who has a distinct music practice, joined in with some of the music making. Her focus, though, was continuing work on the head for her Sonic costume. Working quickly with papier maché, Lucy expertly formed the surface of the head over a frame of withies, somehow managing to hold the shape even as it dripped with glue. Suspended from the beam of the barge, we could really see Sonic coming to life. 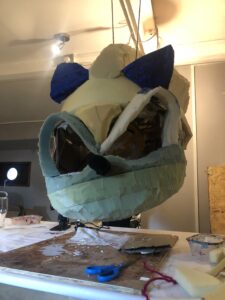 Over the course of the day, artist/makers moved between different techniques and collaborations, developing individual practices and making new connections. We gravitated towards processes that capture fleeting moments – a phrase recorded on a loop pedal, a portrait encapsulating a momentary attitude, a colour palette fixed on the surface of a jigsaw piece. As the artist/makers attended to the small details of their work, the residency seemed to take on a new resonance within ONCA’s wider season of “Making Care”.

We use cookies to ensure that we give you the best experience on our website. If you continue to use this site we will assume that you are happy with it.Ok