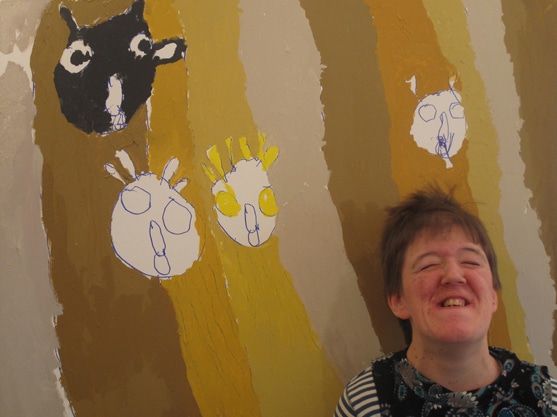 Back to all makers

Eden Kötting loves to paint objects that she has chosen for ‘Still Life’ but sometimes she might also choose to paint images from her head. Her visual impairment influences the way she sees the world and she has worked hard to develop her abilities to look carefully at what she sees. She carefully plans out her drawings in pen or pencil before adding plenty of colour. Working in the studio she continues to expand her range of mark making as well as her painting skills. She has collaborated with her father, artist and film maker Andrew Kötting, on numerous projects for both the cinema and the gallery and together with him she has produced a large body of work around the themes of ‘Still Life’.

Eden’s film for Random Acts – ‘It’s All in the Mind’ – can be viewed here.

In the Realm of Others, De La Warr Pavilion, Bexhill On Sea. 2015

We care about your privacy and strive to limit our use of cookies to those that help improve our site and keep it relevant. By continuing to use this site, you agree to the use of cookies.Accept Read More
Privacy & Cookies Policy
Necessary Always Enabled