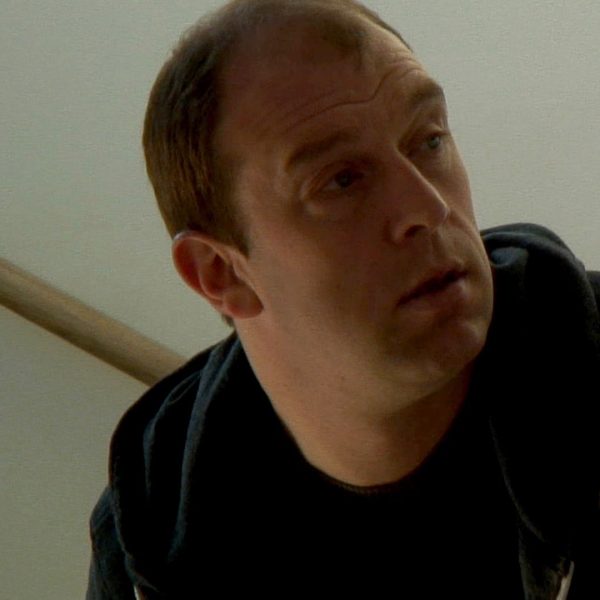 Back to The Collective

Paul Colley has been involved with Project Art Works for more than 15 years. He has collaborated on multiple projects and creative moments during his years in special schools and as a young adult. He has taken a central presence in a series of films made by artist Kate Adams, his mother, including a strand of her practice that evolved into the Project Art Works programme of participatory spatial surveys of built space.

Paul is highly inquisitive and aware of his surroundings. Although he doesn’t use language to communicate his communication is expansive and utilises gesture, subtle facial expression, sounds and behaviour. He thrives in the company of others and for a time worked with the Tuesday Studios group.

Paul enjoys watching live projections of the activities unfolding in the studio. When these are projected onto canvas he works in collaboration with an artist who offers choices of brush, pen and colour to place quick, decisive marks on surfaces.

The studio artists who work with Paul try to hold his attention and gain interaction through working with pictures of things that interest him like planes and the people in his life that he has a strong connection with. He has a very playful way of responding to these sessions, interacting for hours with the artist and their creative inventions and play. Very occasionally he will paint with large, gestural movements.

Illuminating the Wilderness, screened at MK Gallery, Tate Liverpool and Museum of Modern Art in Sydney , 2019

Putting ourselves in the Picture, Fabrica Gallery, Brighton, 2019

Paul Colley is featured at the following exhibitions

This website uses cookies to improve your experience while you navigate through the website. Out of these, the cookies that are categorized as necessary are stored on your browser as they are essential for the working of basic functionalities of the website. We also use third-party cookies that help us analyze and understand how you use this website. These cookies will be stored in your browser only with your consent. You also have the option to opt-out of these cookies. But opting out of some of these cookies may affect your browsing experience.
Necessary Always Enabled

Any cookies that may not be particularly necessary for the website to function and is used specifically to collect user personal data via analytics, ads, other embedded contents are termed as non-necessary cookies. It is mandatory to procure user consent prior to running these cookies on your website.